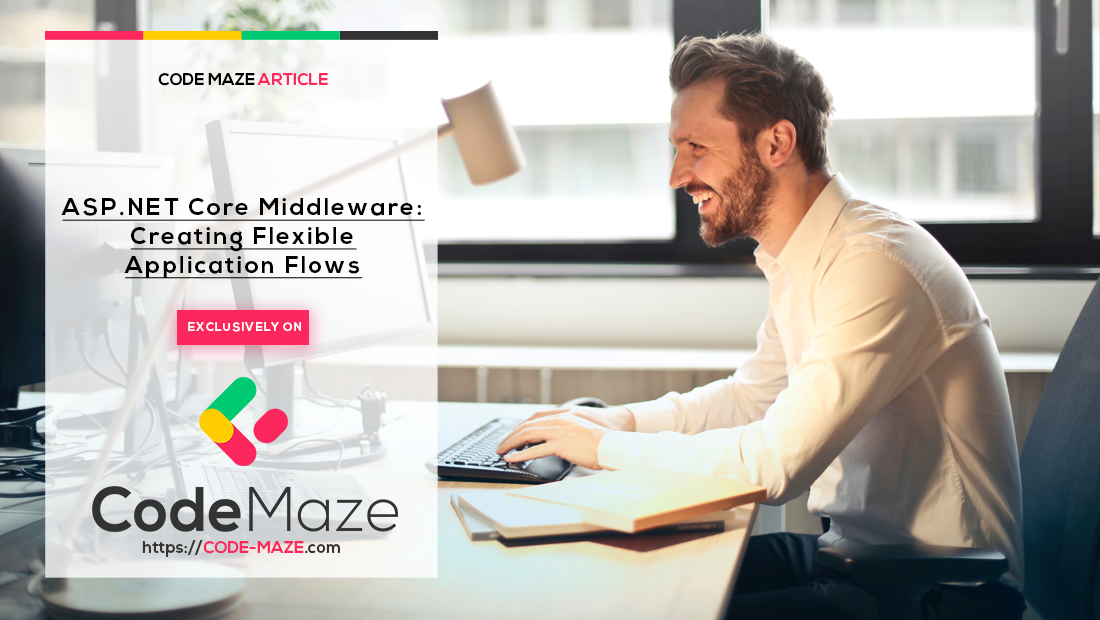 ASP.NET Core Middleware is software integrated inside the application’s pipeline that we can use to handle requests and responses. When we talk about the ASP.NET Core middleware, we can think of it as a code section that executes with every request. In this article, we are going to learn more about the ASP.NET Core middleware and how to use different methods (Run, Map, Use) during the configuration. Additionally, we are going to explain the process of creating custom middleware.

To download the source code for this article, you can visit the ASP.NET Core Middleware repository.

More About the ASP.NET Core Middleware and Pipeline

Usually, we have more than a single middleware component in our application. Each component can:

Inside the request pipeline, an application executes each component in the same order they are placed in the code – top to bottom: 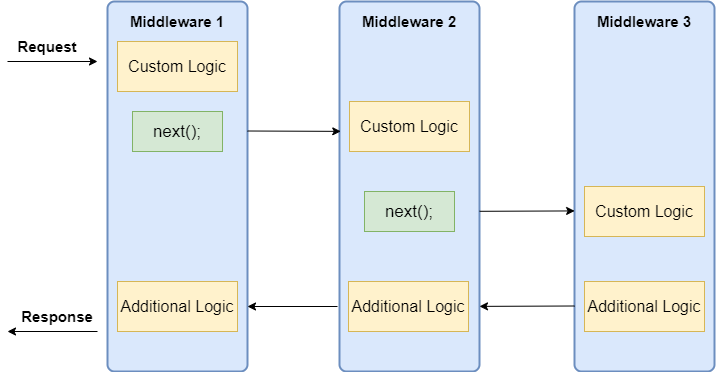 Before we start with examples, it is quite important to know about the order in which we should register our middleware components. The order is important for the security, performance, and functionality of our applications: 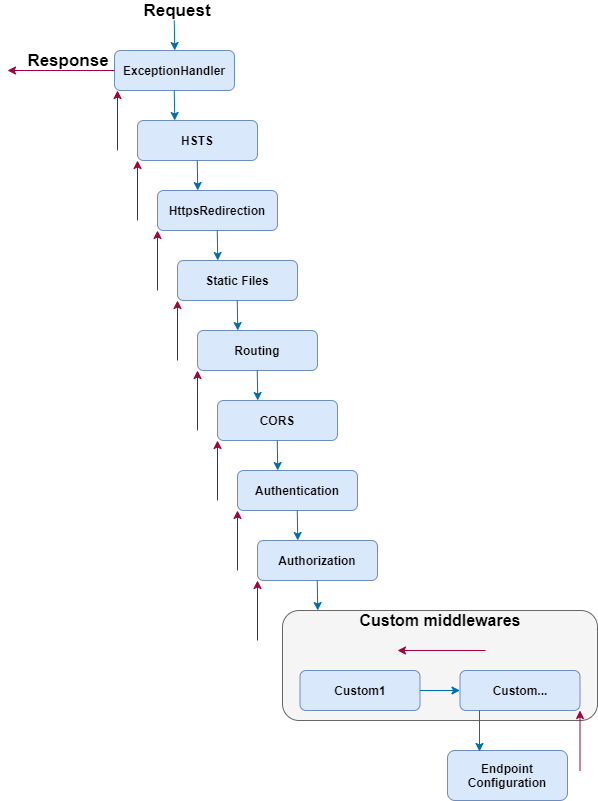 As we can see, we should register the exception handler in the early stage of the pipeline flow so it could catch all the exceptions that can happen in the later stages of the pipeline. When we create a new ASP.NET Core app, many of the middleware components are already registered in the order from the diagram. We have to pay attention to register additional existing components or the custom ones to fit this recommendation.

For example, when adding CORS to the pipeline, the app in the development environment will work just fine if you don’t add it in this order. But we have received several questions from our readers stating that they face the CORS problem once they deploy the app. But once we suggest moving the CORS registration to the required place, the problem disappears.

We can visualize this diagram in the code as well:

As you can see, we are using the Configure method in the Startup class to add components to the pipeline.

In the launchSettings.json file, we are going to add some changes regarding the launch profiles:

Now, inside the Configure method, we are going to use an anonymous method to create a first middleware component:

So, we are using that context parameter to modify our requests and responses inside the middleware component. In this specific example, we are modifying the response by using the WriteAsync method. For this method, we need the Microsoft.AspNetCore.Http namespace.

Let’s start the app and inspect the result:

Working with the Use Method

To chain multiple request delegates in our code, we can use the Use method. This method accepts a Func delegate as a parameter and returns a Task as a result:

So, this means when we use it, we can make use of two parameters, context and next:

The Run method doesn’t accept the next delegate as a parameter, so without it to send the execution to another component, this component short-circuits the request pipeline.

Now, let’s start the app and inspect the result, which proves our execution order:

We shouldn’t call the next.Invoke after we send the response to the client. This can cause exceptions if we try to set the status code or modify the headers of the response.

Here we write a response to the client and then call next.Invoke. Of course, this passes the execution to the next component in the pipeline. There, we try to set the status code of the response and write another one. But let’s inspect the result:

We can see the error message, which is pretty self-explanatory.

Using the Map and MapWhen Methods for Branching

To branch the middleware pipeline, we can use both Map and MapWhen methods.

The Map method is an extension method that accepts a path string as one of the parameters:

When we provide the pathMatch string, the Map method will compare it to the start of the request path. If they match, the app will execute the branch.

So, let’s see how we can use this method by modifying the Configure method:

By using the Map method, we provide the path match, and then in the delegate, we use our well-known Use and Run methods to execute middleware components.

Now, if we start the app and navigate to /usingmapbranch, we are going to see the response in the browser:

But also, if we inspect console logs, we are going to see our new messages:

If we inspect the MapWhen method, we are going to see that it accepts two parameters:

This method uses the result of the given predicate to branch the request pipeline.

So, let’s see it in action:

Here, if our request contains the provided query string, we execute the Run method by writing the response to the client. So, as we said, based on the predicate’s result the MapWhen method branch the request pipeline.

Now, we can start the app and navigate to https://localhost:5001?testquerystring=test:

And there we go. We can see our expected message. Of course, we can chain multiple middleware components inside this method as well.

Creating a Middleware in a Separate Class

In this section, we are going to show you a simple example of creating a custom middleware in a separate class and using it in the application’s pipeline. After you understand everything from this example, feel free to read our Global Error Handling in ASP.NET Core article, to see the custom middleware implementation in action for handling all exceptions globally in ASP.NET Core applications.

So to start, let’s create a new CustomMiddleware class in the root of our app:

After this, we can create another class and place a single extension method inside:

Finally, we have to modify the Configure method in the Startup class below the first Use method:

And that’s it. As soon as we start our app and navigate to https://localhost:5001, we are going to see a familiar response from the previous Run method. But once we inspect the console window, we are going to find our message from the custom middleware:

Excellent. As we said, feel free to read our Global Error Handling in ASP.NET Core article to learn more about the custom middleware implementation.

Working with Factory-Based Middleware with the IMiddleware Interface

There are some benefits of this approach:

Since IMiddleware is activated per client request, we can inject other scoped services into the middleware’s constructor.

So, let’s see how we can use the IMiddleware interface.

Usage of the IMiddleware Interface

The first thing we are going to do is to create a new FactoryActivatedCustomMiddleware class:

Next, we can add one more method inside the MiddleareExtension class:

After this, we have to register our factory middleware in the ConfigureServices method:

Finally, we can call our extension method in the Configure method:

You can start the app, navigate to the required URI and inspect the console logs to see the message from the factory-activated custom middleware class.

In this article we have learned:

So, there we go. After this article, we should have great knowledge about the middleware configuration in ASP.NET Core applications.

Until the next one.