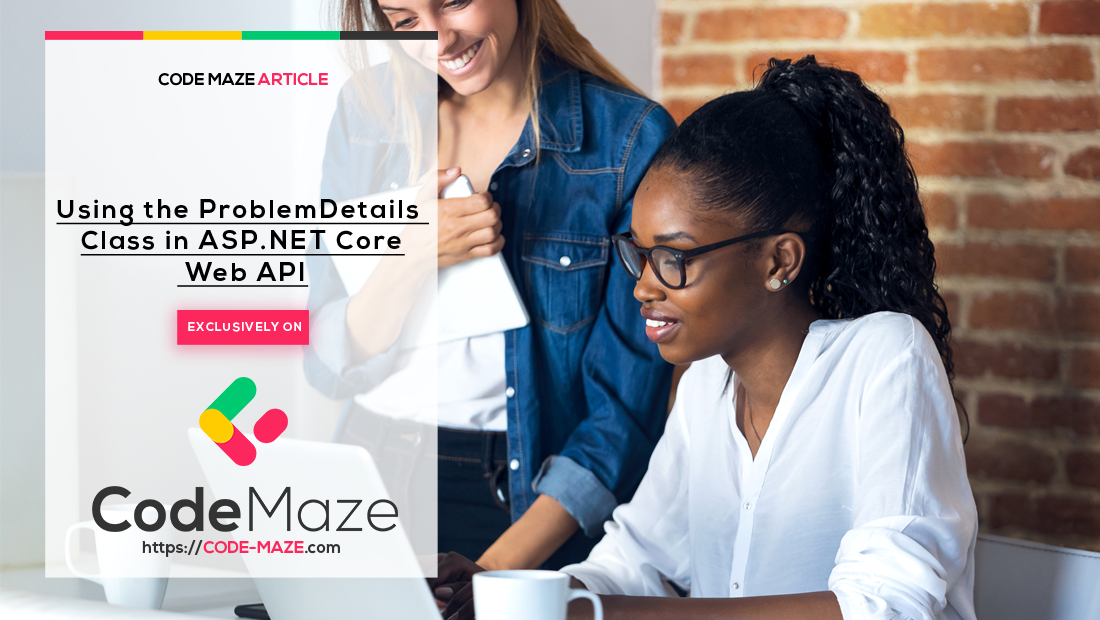 In this article, we are going to talk about the ProblemDetails class and how it plays a role in standardizing error and exception handling in our .NET Core APIs.

To download the source code for this article, you can visit our ProblemDetails Class repository.

The Need for Standardization

For communicating the errors and exceptions to our API clients, we should specify a response format. In some cases, we would also like to let our users know what actually happened when something went wrong, instead of just telling them it was a 404 or 500 error.
If multiple clients consume our API, or if we need to use a selection of someone else’s APIs, it saves a lot of headaches to have this communication standardized.

IETF to the rescue! The IETF RFC 7807 document addresses this topic and creates a standardized format by specifying the Problem Details object. We will explore how that object looks like in a bit more detail and how and where we use it in our .NET Core Web APIs. We are also going to try out a few things from our example project.

After learning where the concept comes from, let’s discover more about what ProblemDetails really is and what it consists of.

So let’s shortly summarize the RFC 7807 defined Problem Details object. It is a JSON or XML format, which we can use for error responses (we are going to cover the JSON format here). This object helps us inform the API client about details of errors in a machine-readable format, without us having to define what that looks like.

Let’s see an example of a response body formatted as the ProblemDetails object. Imagine you are trying to view a certain product in some webshop, but it doesn’t exist anymore:

As we can see from the response headers, the Problem Details JSON object is of type “application/problem + json”. As the documentation specifies, it contains the following members:

Some of these members deserve a few more notes, so let’s cover that in the next section.

The “Type” member is assumed to be about blank when left unspecified. When it exists, it provides a human-readable reference that describes the type of problem in general. Here, in the example response, it leads to a custom error page. That page would explain to the user that the product they were looking for doesn’t exist. In other cases, it can, for example, link to the description of the HTTP status code.

The “Status” member is only advisory. It could be useful in some cases where we want to confirm that our response header hasn’t been tampered with. It should always correspond with the server-generated status code specified in the response headers. This is to make sure that the client behaves correctly even if they don’t understand the ProblemDetails format.

The “Instance” member identifies the specific occurrence of the problem and it may or may not reference more detailed information.

Besides the specified default format of the Problem Details object, we can also always extend it if we want to add custom information. We’ll see more about this later in our code examples.

It’s important to note that the Problem Details object is not intended as a debugging tool. We should always be careful about exposing our implementation details in these responses.

Using the ProblemDetails Class in Our APIs

In .NET Core, since version 2.1., the Problem Details object is represented by the ProblemDetails class. In our ASP.NET Core Web APIs, there are a few places where the framework now automatically uses the ProblemDetails class – in returning error status codes and in model validations.
We can explore these examples more using our starting project source code that you can find here. The example project uses an in-memory database so we can focus on the ProblemDetails class. It uses the ProductController as the primary entry point for the API and we can send the requests and inspect the results using swagger, which we already have configured in the project.

Since ASP.NET Core version 2.2., using the ControllerBase built-in methods for returning the HTTP status code responses, like Ok() or BadRequest(), automatically formats the response as the ProblemDetails class. This is done thanks to the [ApiController] attribute in our controllers.
We can see this formatted error response in our example if we try to send a GET request with a product id that doesn’t exist:

How Model Validations Use the ProblemDetails Class

We can use our example project to send a POST request with some wrong data, so we can inspect this behavior. If we send a request body without a product name, and with a category name longer than 20 characters, we are going to get an error response triggered by the model validations: 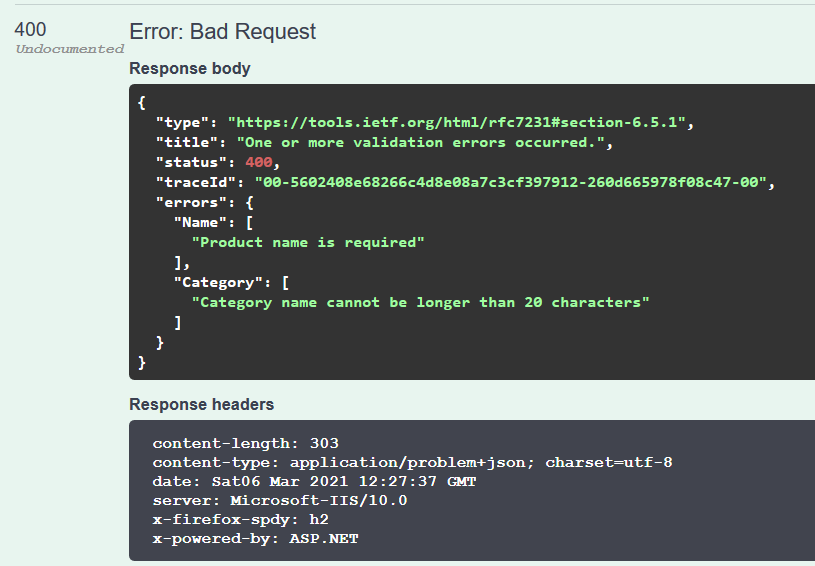 Exception Handling With the ProblemDetails Class

For the exception-handling part, however, we are not covered by the framework and we have to do some heavy lifting ourselves. Usually, when an unhandled exception happens, our API returns the 500 Internal server error response.

To standardize this with the mentioned format and make life easier for ourselves and our API clients, we can try to:

The goal is the same in all cases (except the first one) – to keep our controllers nice and clean. We do this by extracting the error handling into the pipeline. We thoroughly describe the general approach to handling errors globally in our guide on global error handling, so here we are going to focus only on the last option.

Until ASP.NET Core gives us an automated process for exception handling that returns a problem details object, the Hellang ProblemDetails middleware gives us a little advantage over the other options. It includes exception handling already set up out-of-the-box. The heavy lifting is done for us and it’s also formatted to the nice problem details standard. We are now going to see how to implement it into our APIs.

In our example project, we are using the middleware version 5.1.1. which was the latest version available. After installation, we first have to configure our Startup.cs file:

If you are using .NET 6 and later, you have to modify the Program class. Also, since you don’t have the ConfigureServices and Configure methods, you can’t use the services parameter but the builder.Services property.

We register the service in our ConfigureServices method with the AddProblemDetails(), and we also add the middleware to our request processing pipeline by calling UseProblemDetails().

The Middleware in Action

After we configure the necessary settings in our Startup class, we can force an exception in our controller action:

Once we use Swagger to send the GET request to this endpoint, our middleware is going to generate a ProblemDetails-formatted response: 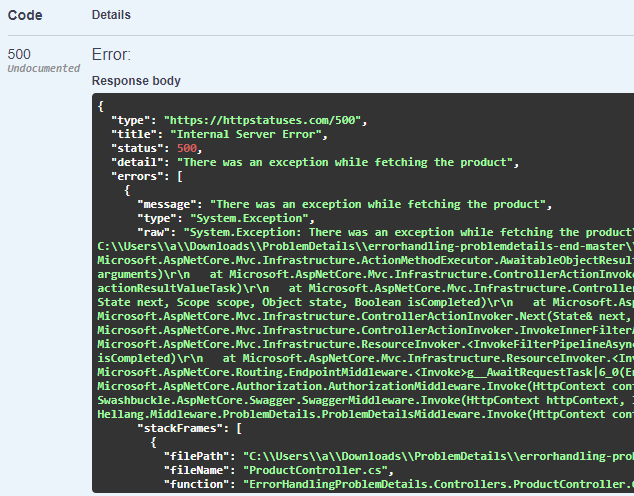 There is a lot of sensitive data in our response here, and this should only happen in our development environment. We will use some additional customization to ensure this does not happen in production.

Besides the implemented functionalities of the middleware, we have some space to customize things as well. Let’s see some useful and interesting things we can do.

Firstly, we should always customize the middleware to include the exception details only in the development environment:

We configure this in our Startup class. Here we set it up to use the exception details only in the development or staging environment – just to show the possibility.

Let’s now change to the production environment. If we send the same GET request again, our response body doesn’t include the exception details anymore:

If we want to create our custom exception class and map it to the problem details object created by the middleware, we can also do that:

After that, we are going to update the Startup.cs configuration to map our custom exception to the ProductCustomDetails class:

And force our custom exception in the controller to demonstrate the response:

Finally, we can inspect our custom exception response body (in the production environment): 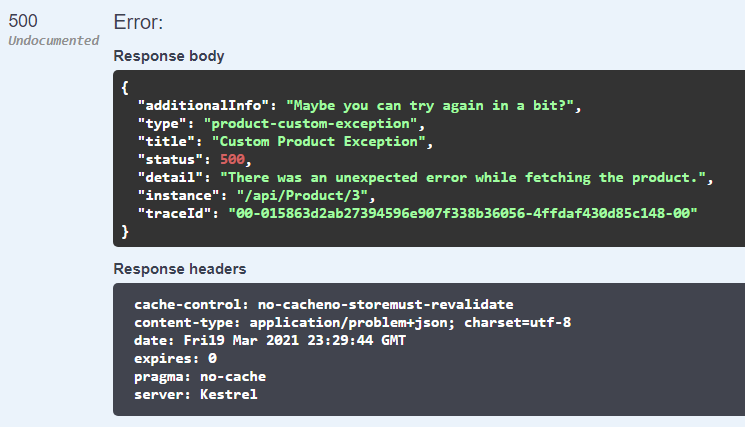