Getting Started with AutoMapper in ASP.NET Core

In this article, we are going to learn how to use AutoMapper in an ASP.NET Core application.

We are going to start by looking into what AutoMapper is and what problem it solves. Then, we are going to explain how we can use AutoMapper in our MVC application. After that, we’ll learn about the usage guidelines and best practices. We’ll also take a look at what’s happening behind the scenes and how to flatten complex object models.

You can find the source code on our GitHub repository.

If you prefer video learning, you can watch the video on the same topic:

VIDEO: Getting Started with AutoMapper in ASP.NET Core video.

Let’s learn what problems we can solve with AutoMapper.

AutoMapper is a simple library that helps us to transform one object type into another. It is a convention-based object-to-object mapper that requires very little configuration.

The object-to-object mapping works by transforming an input object of one type into an output object of a different type.

AutoMapper was built to solve a complex problem that most developers face in their day-to-day life – writing code that maps one object type to another. This type of code is rather tedious and boring to write, so why not leave that job to this little tool?

What makes AutoMapper interesting is that it provides some easy-to-use conventions to take the dirty work out of figuring out how to map Type A to Type B. As long as Type B follows AutoMapper’s established conventions, almost no configuration is needed to map two types.

Here’s one common scenario. We’ve created an application and we want to keep the separation between our domain models and our view models.

In order to accomplish this, we need to write the code to adapt our domain model to our view model. Then, as we add more views and domain models, we end up writing more adapters. Later on, we’ll have to write even more adapters to map our data transfer objects from the database layer into our domain objects.

This is mundane and repetitive. And this is where AutoMapper comes in.

How to Use AutoMapper in Our Application

Let’s have a look at how to add Automapper into our .NET Core application.

The first step is to install the corresponding NuGet package:

We’ll explain the configuration for both .NET 5, and .NET 6 and above versions.

After installing the required package, the next step is to configure the services. Let’s do it in the Startup.cs class:

For .NET 6, we have to modify the Program class:

That’s it. AutoMapper is installed and configured in our project. Now, let’s see how to use it with our objects.

Let’s say we have a domain object named User:

In the UI layer, we would have a ViewModel to display the user information:

Now, let’s see how we are going to convert our domain object to a view model.

A good way to organize our mapping configurations is with Profiles. We need to create classes that inherit from Profile class and put the configuration in the constructor:

Now, let’s define a Controller and use the Auto-Mapping capabilities that we just added:

First, we inject the mapper object into the controller. Then, we call the Map() method, which maps the User object to the UserViewModel object. Furthermore, pay attention to a local method GetUserDetails that we use for the local data storage. You can find its implementation in our source code.

Let’s create a View for the Index action method as explained in the article’s section: Creating Views. 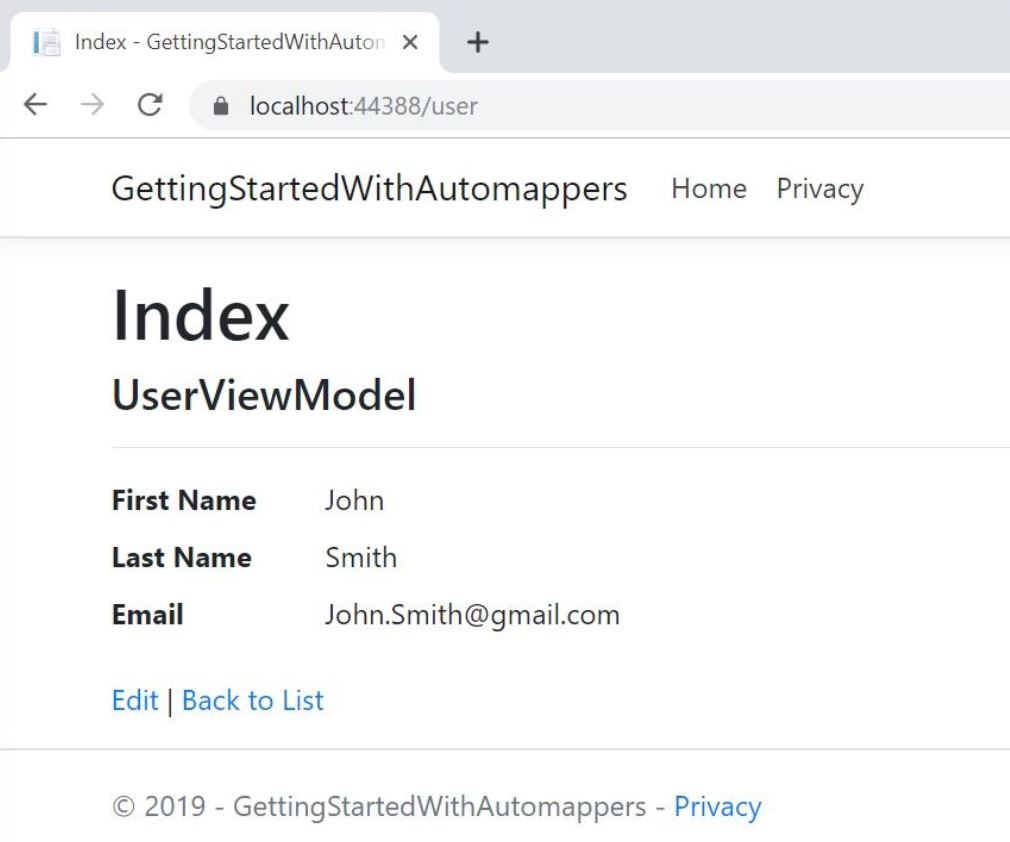 We can see our User domain object is properly mapped to the UserViewModel object.

Mapping to Properties with different Names

Well, that was quite simple, wasn’t it?

But what if we have different property names in our source and destination objects. Let’s take a look at how to do the mapping in these cases.

Here we need to map the properties from the User domain object to our UserViewModel:

So, let’s change the mapping in the UserProfile class:

We use the CreateMap() method to create a mapping by providing the source and destination properties.

If we want to customize the configuration for individual members, we can use the ForMember() method which has the parameters destinationMember, which is of type Expression and memberOptions, which is of type Action.

For example, the above code maps FirstName and LastName properties of the User object to the FName and the LName property of UserViewModel respectively.

After making these changes, let’s run the application once again. We can see that these properties are mapped correctly.

So far, we have only looked at one-directional mapping, which means if we have two types Type A and Type B, then we only map Type A to Type B. But, by using Automapper’s Reverse mapping capability, it is possible to achieve bi-directional mapping:

Once Reverse Mapping is configured, we can map back from destination to source type:

Just one note. We can use AutoMapper in the same manner in the ASP.NET Core Web API project as well, the implementation is the same just we wouldn’t map to the view models but, for example, our DTO classes.

We have seen the magic of AutoMapper in action. So what happens in the background?

AutoMapper uses a programming concept called Reflection to retrieve the type metadata of objects. We can use reflection to dynamically get the type from an existing object and invoke its methods or access its fields and properties.

Then, based on the conventions and configurations defined, we can easily map the properties of the two types. AutoMapper was built around this concept.

As with every other component that we use in our application, there are certain usage guidelines and best practices that we need to follow while using AutoMapper.

We can map Domain Objects to ViewModels with AutoMapper’s Flattening.

If we follow these conventions, AutoMapper will automatically map our objects. Otherwise, we’ll need to configure AutoMapper using Fluent API.

Also, note that we have added a method GetFullName() to get the user’s full name.

Now, Let’s modify the profile class to use the default conventions:

Let’s run the application once again:

This time, we can see that the GetFullName() method on the source object is correctly mapped to FullName property on the destination object.

These mappings are correctly handled by the AutoMapper using its default conventions.

In this article, we have learned the following concepts:

That’s all for now. Hope you enjoyed the article. We’ll cover more advanced topics related to AutoMapper in one of the following articles.