The Importance of .NET Framework

.NET Framework is the original implementation of .NET which was developed by Microsoft in the early 2000s to build Web and Desktop applications for Windows. It allows us to write applications in C#, Visual Basic, and F#.

It is an execution environment that provides a variety of services to its running applications and also an extensive class library to write different kinds of applications.

The code written in any .NET supported language is compiled into a special language called Intermediate Language (IL) and stored in assembly files with a .dll or .exe file extension. When an application runs, the CLR takes the assembly and turns it into machine code through a process called just-in-time (JIT) compilation.

The .NET Framework provides many services to its running applications. It provides memory management, a common type system, and also language interoperability. Going into details of these topics is not in the scope of this article, therefore, we are not going to explain them.

The Rise of .NET Core

Due to the rise of different devices and cloud computing, in the past few years, software development trends have changed quite rapidly. Along with Windows, other operating systems usage has also increased.

A large number of software and services are now being developed for different platforms. Because of this trend, Microsoft started developing a new framework that can fulfill the requirements of the current as well as future software development needs.

Hence, they developed a new framework called .NET Core. It is an open-source and cross-platform implementation of .NET. It shares many of its characteristics with .NET Framework but there are differences as well which we are going to discuss in a while.

All aspects of .NET Core are open-source including class libraries, runtime, compilers, languages as well as application frameworks. .NET Core also supports C#, Visual Basic, and F#. It can run the application code with the same behavior on multiple architectures, including x64, x86, and ARM. It has a flexible deployment model in which it can be included in the application or installed side-by-side (user-wide or system-wide).

.NET Core can also be used with Docker. It also includes command-line tools that can be used during local development and most importantly in continuous integration.

Currently, all the innovations and major enhancements are being made in .NET Core. However, the .NET Framework is also being developed but at a much slower pace.

What is .NET Standard?

.NET Standard is a specification (not an implementation of .NET) that defines the set of APIs that all .NET implementations must provide. It addresses the code sharing problem for .NET developers across all platforms by bringing APIs across different environments.

We can think of it as another .NET Framework, except that we use it to develop class libraries only. .NET Standard is a successor of the portable class library.

Ok, so .NET Standard specifies the APIs that need to be implemented.

But which APIs does it cover?

To answer this question in short – there are multiple versions of the .NET Standard. Each version includes a set of APIs which we are going to cover in a while.

Newcomers to .NET who try to understand the .NET Standard can easily get confused in the beginning.

And here’s one of the reasons why that might be. 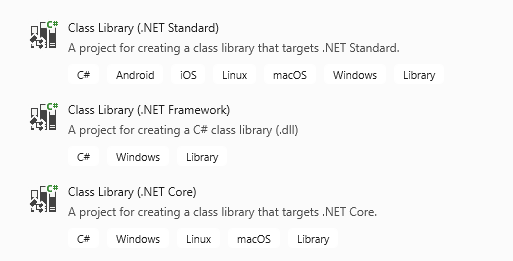 If we take a look at the properties of all three projects, we can see each property window has a field named Target framework; which is right for the .NET Framework and .NET Core projects.

But for the .NET Standard project, it might be misleading, because, newcomers might think of it as a framework and not a specification:

The official documentation introduces .NET Standard as a specification and tries to distinguish it from the framework but this distinction doesn’t seem to be reflected in the development tools.

Now we understand that .NET Framework and .NET Core are two different .NET implementations, therefore, both can be compared.

Because .NET Framework and .NET Core are .NET implementations, therefore, we can compare them together against the .NET Standard.

Let’s discuss what point should we keep in mind while choosing the target platform and their versions.

We should use the .NET Core:

Use the .NET Framework when:

.NET Standard should be the choice when:

Once we choose the right platform and project type for our application, the next step is to use the correct version. Let’s suppose that we have to target both, the .NET Framework and .NET Core and we also want to share the common code across both of these platforms.

Of course, the  .NET Standard class library will be our choice here. Choosing the correct version for this scenario would have been quite challenging, but fortunately, Microsoft has provided us with a nice helpful chart: 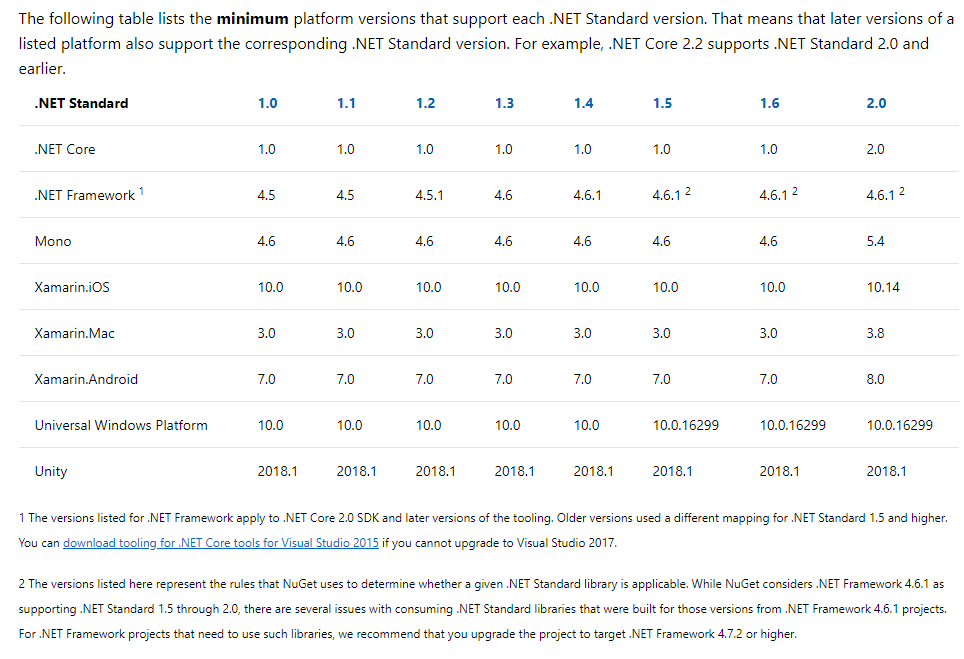 The same goes for all other versions.

We have tried to remove that confusion among the .NET Framework, .NET Core, and .NET Standard by clarifying these concepts and comparing them with each other. We have also shown how to choose the target platform and its version depending on our needs.