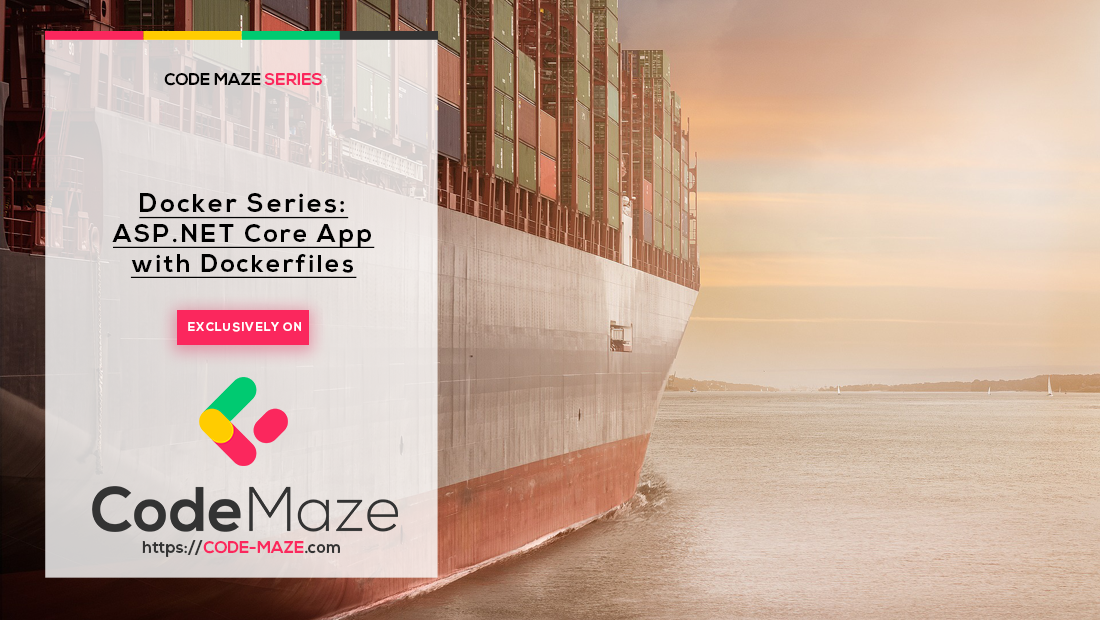 In the previous part, we’ve gone through some scenarios to show off the Docker’s potential. We have also seen how to utilize Docker CLI and even made the simplest Dockerfiles to learn how to build the images using Docker.

In this article, we are going to focus on dockerizing our ASP.NET Core application with Dockerfiles, and understanding how Dockerfile syntax works. We are also going to spend some effort in optimizing our images to achieve the best results.

To follow along with the steps of this tutorial you need to get the docker-series-app-prepared branch of our docker-series repo.

There are a few steps we need to do in order to dockerize ASP.NET Core application:

The first step we need to do is to navigate to the root folder of our solution and make a new Dockerfile. Dockerfiles are the declarative inputs that we can use to tell Docker what to do with our application.

Let’s add some actions to our Dockerfile:

A Bit of Explanation

So what have we done exactly?

Since we are copying our files to the docker image on every build, we should create a .dockerignore file and select which files and folders we don’t want to copy every time. The advantages of using a .dockerignore include faster image build, improving cache performance, and avoiding potential conflicts when building an application.

For example, we don’t want to copy our Dockerfile.

Because besides not being important to the build process, that would mean our COPY step will trigger everytime we change the Dockerfile, and that’s not something we want. So you want to put all the files that you don’t want to trigger a build into a .dockerignore file.

For starters, we are going put these files and folders in our .dockerignore file.:


Learning Web API? Get our eBook ASP.NET Core Web API Best Practices and become an expert for FREE!   >> GET THE BOOK <<

Once we configured our Dockerfile and .dockerignore, we can start the build and tag our image:


The first time you run the docker build, it will take a while, since Docker is fetching the base image. Give it some time. After the first build, every following build will use that image from the local machine.

First build is fun and you get to see every step of our Dockerfile resolving in real-time.

After the first build, if you don’t change the project files, all the steps will be cached and you’ll get something like this:

As you can see every step is cached, and there is no need to rebuild the image. If you want you can force the rebuild with the –no-cache flag.


If you run the docker images command, now you can find our image on the list:

Finally, to run the application you can spin up the container by typing:


This should run our application as we expect it to so far.
Learning Web API? Get our eBook ASP.NET Core Web API Best Practices and become an expert for FREE!   >> GET THE BOOK <<

But, take a quick look at the image size. It’s the biggest so far. That’s because we copied, restored and published our code in the same image.

Let’s try to optimize the process.

As we have learned by now, Docker images consist of different layers, and we’ve seen the Docker build process. It goes step by step and executes the steps we defined. Once the step is executed, it gets cached, and if there are no changes related to that step it gets pulled from the image cache next time we run the build.

So, knowing all this can you guess what we could have done better in our Dockerfile?

Well, let’s have a look at that third step once again: COPY . ., and then we do RUN dotnet restore.

What this means is that whenever we make a change to the source code, we need to run dotnet restore since that will break the cache.

So instead of copying all the files, we can just copy the project and solution files, do the dotnet restore, and then copy the rest of the files:


There, now the dotnet restore won’t trigger whenever we change something in our source code. We’ll only need to re-publish the assemblies.

But why do we copy every project and solution file manually?

That’s because something like COPY ./**/*.csproj ./ wouldn’t work. It won’t recreate the folder structure. So you would just get the flat structure with all the project and solution files. And that’s no good.

We can push the optimization even further.

The downside of the current way of creating the Dockerfile is that we need to manually copy each solution and project file. That means we need to change the Dockerfile whenever our solution structure changes, and it just looks bad. It’s a lot of work.

So let’s see how we can remedy that.

Take a look at the next Dockerfile:


So, what happened here?

In short, we used some clever syntax as a workaround for the COPY command to recreate the folder structure we need. The command uses the project names to create folders for the files to be copied in.

To avoid unnecessary explanations here, you can read more about the command in the Andrew Lock’s blog post.

Now we don’t need to change the Dockerfile even if the add more projects to our solution or change project names.

There is one more tiny little thing we need to do. We need to run our unit test to see if the project is even worth publishing!

So let’s add that to our Dockerfile as well:


That’s it. Rebuild the image again and check out the result.

The test has failed, and the build has stopped. The publish step hasn’t been triggered, which is exactly what we want.

We’ve gone through the entire process, but there is one thing that some of you might have noticed. That’s not something you want to use to run your containers from.

SDK images are powerful and we use to build and run applications. Nevertheless, to deploy our application to a production environment, we should create an image that is optimized for that purpose only.

In comparison to SDK images, runtime-only images are much lighter.

So let’s see how to upgrade our Dockerfile and publish our application to the runtime-optimized image.

For this purpose, we are going to use something called a multistage build in the Docker world. Multistage builds can be created by using FROM command multiple times in a Dockefile.

So we are going to do just that to upgrade our process. Instead of using our SDK image to publish our application to, we are going to introduce another base image to the Dockerfile and publish the artifacts inside it.

Let’s see how to do that:

First, we added as build-image to the first FROM command for easier referencing later.

Third, we moved the entry point to the runtime image, so that we run the application when we instantiate the runtime container. The SDK container shall no longer be responsible for running our application.

So, what’s the result of all this? Let’s see.

When the build finishes, we get two images. One is tagged and one is not. One is runtime and one is SDK. In this case, we are not interested in the SDK image, but you can clearly see the size difference.

So that’s it, now if you run docker run --rm -it -p 8080:5000 codemazeblog/accountowner:runtime you’ll get the same result and you’ll be able to see your application at the http://localhost:8080/swagger.

Let’s wrap the article up with the commands you might find useful while following these steps.

All the changes we made in this article can be found on the docker-series-dockerfiles-end branch of our docker-series repo.

Here are some of Docker commands that might help you along the way:

That’s it for this part.

We’ve learned how to build ASP.NET Core application with Dockerfiles, some useful commands and what each one does. We’ve also learned the difference between the SDK and runtime images, and that we can combine them to achieve the best results by using the multistage Docker builds.

Now that we know all this we can move on to the next part, in which we connect our application to MySQL. That will also be the perfect opportunity to introduce docker compose tool, which will make our lives much easier when working with multiple images.