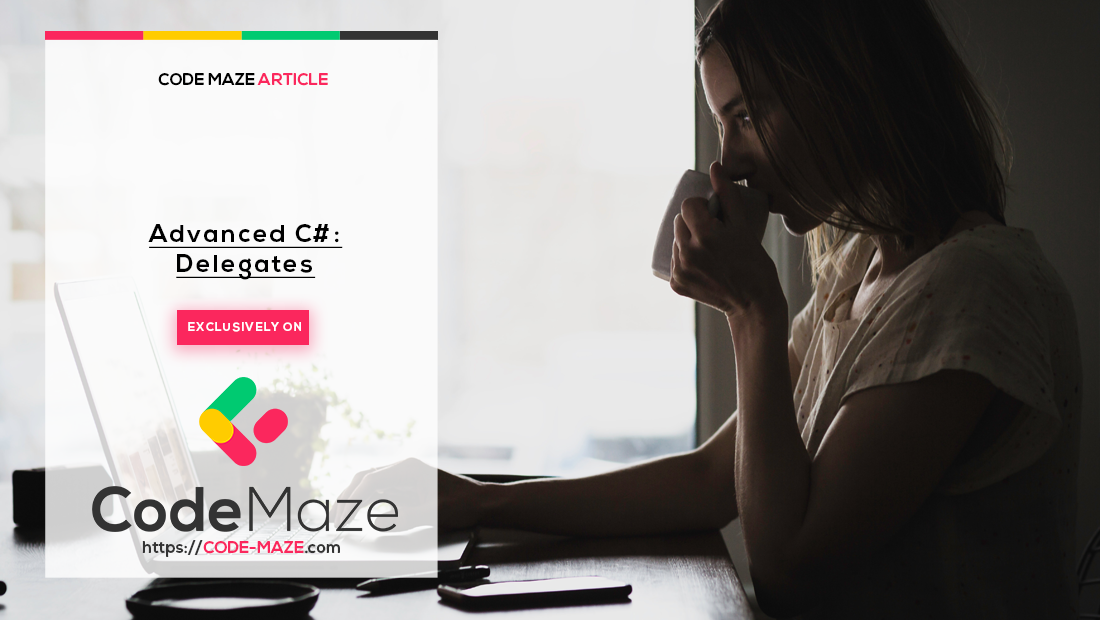 In this article, we’re going to talk about C# delegates, which are a prerequisite for learning events-based programming. Delegates are one of the fundamental building blocks of flexible applications, as they can be found in the vast majority of .NET framework code base and client libraries.

What is a C# Delegate?

A C# delegate is a reference to a method. If we call a delegate, the referenced method is called instead. Delegates have all the necessary information to call a method with a specific signature and return type. We can pass delegates as an argument to other methods or we can store it in a structure or a class. We use delegates when we don’t know which method is going to be called at design time but only during runtime.

Delegates are widely used to implement events and callback methods.

To declare a delegate we use the delegate keyword:

This delegate can reference any method that has one string parameter and doesn’t return a result.

Additionally, we can take a look at the delegate syntax:

With that out of the way, let’s see how we can instantiate a delegate.

Let’s define a method that this delegate can point to:

Now we can instantiate the delegate in a few different ways:

There’s also a shorter version of the same syntax:

And we can do it with an anonymous method as well:

Or even more concisely with a lambda method:

As you can see, the last two examples don’t need our method, we can just add the implementation directly. The last example is probably something you’re used to seeing most of the time since it’s the most modern approach (C# 3 onwards).

Delegates can be invoked by using the Invoke() method:

or just by invoking the delegate directly using ():

This results in the text being printed to the console:

That’s all there is to it.

Delegates are even more powerful than that. One delegate can reference multiple different methods. These delegates are called multicast delegates.

We’ve printed some text to the console. Let’s say we need to print it in the reverse order as well. Let’s create that does that:

And then we can implement the multicast delegate in two different ways. We can create a delegate that’s the combination of the existing ones:

We can also use the = and += to achieve the same thing:

The result is exactly the same.

We can make our delegates even more useful, by extending them with generic types.

We can create a generic delegate:

This delegate both accepts and returns generic types.

Let’s say we have a method that accepts a string and then returns a reversed string to the caller:

While instantiating generic delegates we need to declare the concrete types:

This prints out the reversed string as expected:
.kcab eb ll'I

But now we’re not bound to use just strings, we can use anything we like, even the complex objects. The implementation is entirely up to the methods we reference.

Now that we know how to create generic delegates, we can mention Func<T>, and  Action<T> delegates readily available within the .NET framework. These delegates already do what we’ve done manually with delegates so far.

The results are exactly the same as before.

Say we have a list of strings. We can easily extract all the strings that contain the specific substring:

The Contains() method evaluates the expression, and returns the source (string in this case) if it fulfills the condition, which is in this case that the string contains “some text”. We’ll end up with the IEnumerable<string> of all the strings that contain the phrase “some text”.

Delegates are an exceptionally useful concept in C#. Once you wrap your head around them, you can use them in all kinds of scenarios and create more modular and flexible applications. We’ve seen how we can declare, instantiate, use, and multicast delegates. Then we’ve introduced the generic delegates which we see all around the codebases, sometimes even without noticing them.