Using the API Gateway Pattern In .NET to Encapsulate Microservices 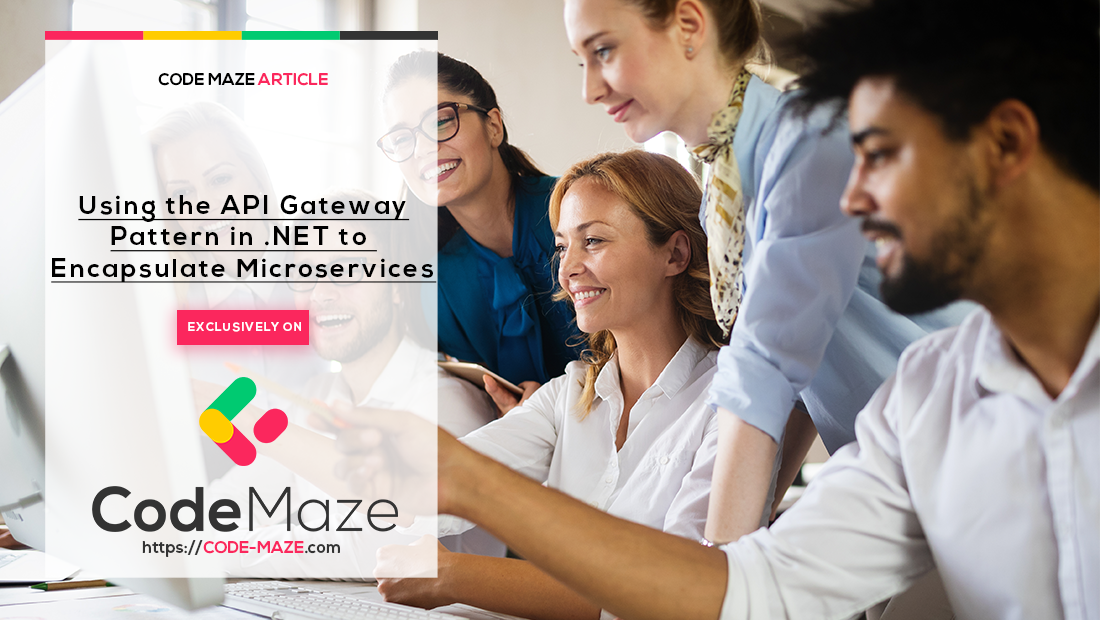 In this article, we are going to look at how the API Gateway pattern can be used to encapsulate microservices and abstract away the underlying implementation details, allowing consumers to have a consistent entry point into our system.

To build and test out our application, we are going to need:

Since microservices is a fairly complicated topic before we jump into code in the next section let’s spend a moment explaining the basics.

Microservices are an architectural style, and therefore the implementation of this style can vary greatly and is often a hotly debated topic. However, most experts agree that a microservice has the following attributes:

Most of us are familiar with the “monolith” architecture, where a single application (often containing multiple logical “layers”, such as UI/business/data), is deployed onto one or more servers as a single process.

The microservices architecture looks to break the application up into smaller pieces, and deploy them independently. The process of breaking up the application is a complex and important one outside the scope of this article, therefore some research on Domain-Driven-Design (DDD) is recommended here.

Describing the differences between the monolith and microservices architecture is a topic on its own, and as we touched on some benefits of microservices earlier we won’t go into too much detail here. For the purposes of this article, the main benefit we’d like to focus on is independence. That is, we’ll see how changing a single microservice will not bring the entire application down, and other microservices do not even need to be concerned with the change. This is vastly different from the monolith architecture, where we need to bring down and update the entire application for any small change.

Let’s open up the sample monolith application we downloaded earlier, and inspect the solution: 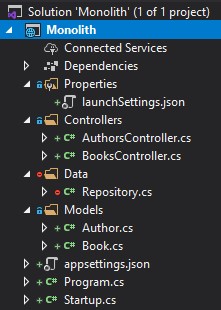 We can see it’s a simple ASP.NET Core API, with a controller each for authors and books.

Let’s hit CTRL+F5 to run the application in our browser, which will invoke the “/books” endpoint: 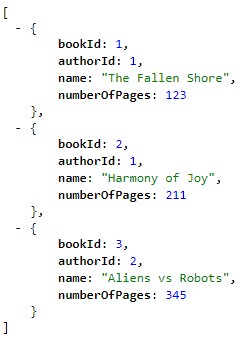 We can see it returns a fake list of books.

Let’s change the URL in our browser to “/authors”: 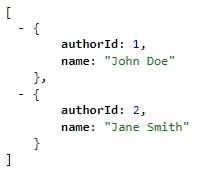 First, let’s create the AuthorsService by adding a new ASP.NET Core API to the solution: 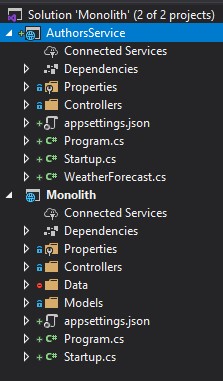 Now, we can do a bit of refactoring to extract the relevant code from our monolith to our new AuthorsService.

We should end up with the following structure: 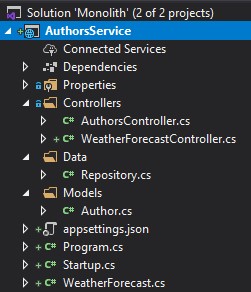 Next, we are going to make a few adjustments to get the AuthorsService up and running.

First, let’s add the following line to the ConfigureServices method in Startup.cs:

The Singleton instantiation is simply due to the fact the Repository is a fake class.

Next, let’s remove the references to Book in our Repository, ending up with:

Now, we can run our new AuthorsService and point the URL to the “/authors” path: 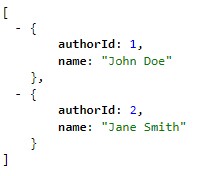 Great! We’ve got our Authors microservice up and running.

Let’s now follow the exact same steps above to extract the relevant Books code from the Monolith to a new BooksService API. We’ll save repeating all the steps again here, as it should be self-explanatory.

Let’s run the new service and point the URL to the “/books” path: 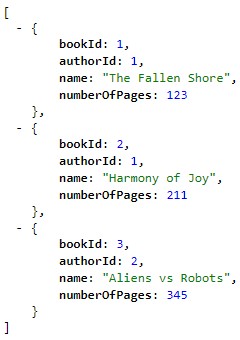 We now have our Books microservice up and running.

At this point, we could deploy these two microservices independently on two different servers and expose their endpoints for use. They are not coupled together in any way.

But in the next section, we are going to discuss how we can use the API Gateway pattern here to solve some problems with this approach.

If someone wants to consume our monolith API, it’s very simple as there is only one host to deal with, e.g “https://ourmonolithapi.ourcompany.com”

However, now that we have extracted this monolith into two separate microservices, this becomes more difficult as the consumer needs to interact with multiple APIs: 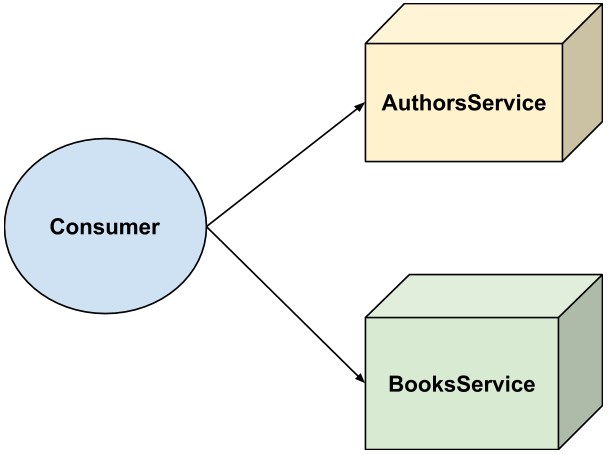 Questions arise such as:

How the API Gateway Pattern Helps

This is where the API Gateway pattern comes in, as it insulates the consumers from all of these questions, by sitting in “front” of the microservices:

Now back to our earlier questions:

It’s also worth mentioning a similar pattern, called the “BFF” pattern. No, it doesn’t mean best friends forever, but rather “Backend-for-frontend”. This pattern is very similar to the API Gateway, but it involves creating an API Gateway per “frontend”.

This picture illustrates how we could implement the BFF pattern for our use case:

In this case, each client has it’s own BFF / API Gateway, whose features can be tailored for that particular client. For example, maybe the web apps would like some SEO functionality, that the mobile apps don’t care about. This allows the mobile and web teams to operate autonomously and own their own data layer.

However, for this article, let’s focus purely on a single API Gateway for a single consumer.

How can we implement the API Gateway pattern?

There are a number of ways we can implement the API Gateway pattern, including using off-the-shelf software. The choice will ultimately depend on the features required for the API Gateway.

Services such as Traefik, Kong, and Azure API Management can provide all or some of these features, so it’s worth reading up on them depending on what’s needed for your use case.

However, for the purposes of the article, we are going to exclude those features and focus on the bare minimum functionality, being a simple HTTP-based proxy between the consumer and our microservices. To implement that, we can very easily do it ourselves with ASP.NET Core.

Since we already have the monolith API in our solution and we are planning on using ASP.NET Core for our API Gateway, we can simply convert it into one for our purpose.

First, let’s delete the “Controllers”, “Data” and “Models” folders, as we no longer need them.

Next, let’s add the following line to ConfigureServices() in Startup:

This is so we can call our new microservices via HTTP Client.

The code should be fairly self-explanatory, but essentially we are using HttpClient to make calls to our new microservices and returning the response straight back.

Let’s build and run all three of our projects in the solution, and we should have:

With everything running, let’s open up our browser to https://localhost:5001/books: 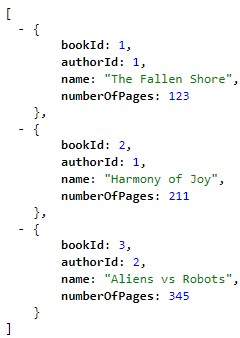 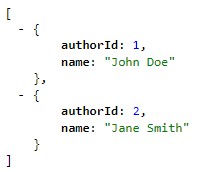 We now have a functioning API Gateway, proxying requests to our two microservices!

In the next section, let’s add a simple consumer of our API Gateway.

Now that we have an API Gateway, let’s look at adding a simple web page that can consume our API.

Before we do that, we need to enable CORS in our API Gateway, so that we can make cross-domain requests.

For testing purposes, we are allowing CORS from any origin. But for a production application, we’d want a more strict CORS policy.

Next, let’s add the CORS middleware to the ASP.NET Core pipeline in the Configure() method:

Let’s build and run our application, to deploy the new changes.

Here we simply have a couple of buttons, which when clicked will call our API Gateway and alert the result.

Let’s open the HTML page in our browser, hit the “Get Books” button, and we see a browser popup:

Let’s then hit the “Get Authors” button:

We see that our consumer was able to call our API Gateway, which in turn was able to proxy these requests to the relevant microservice.

In the next section let’s see how we can go about changing one of our microservices, which will highlight one of the benefits of microservices the API Gateway pattern.

We talked earlier about how microservices should be independently deployable, and that changing one microservice shouldn’t need to bring down the entire application (the “application” in this case, being the API Gateway).

We can prove that theory, by changing the “Authors” microservice.

First, let’s “bring down” the Authors microservice, by stopping the site in IIS Express:

If we then hit the “Get Authors” button again, we’ll see an error:

However, if we hit the “Get Books” button:

As expected, it is still returning a result.

Now, we are going to make some changes to our Authors microservice.

First, let’s add a new property to the Author class:

Next, let’s update our repository to return our new field:

This is a trivial change, but the point is that the change could be anything: a new field sourced from a new database, upgrading a package, or even rewriting the entire app under a different programming language. As long as the contract between the microservice and the API Gateway is adhered to (e.g no breaking changes), nothing else needs to happen.

Let’s build and run our Authors service again, then hit the “Get Authors” button:

We see our new change coming through to the consumer.

It’s worth pausing here for a moment, to see what we have achieved:

Consider if our consumer was more feature-rich, and for example, listed all the books. If this feature didn’t require any author functionality, the feature could continue to be served to users even with updates to the authors.

This is very powerful, as it allows “graceful” degradation of some functionality, whilst preserving others. We could even add more features to the API Gateway around this, for example, detecting the outage of the downstream service and returning cached data, or leveraging backup functionality. The point is, consumers of our backend are insulated from any changes behind the scenes by the API Gateway.

In this article, we took a brief look at the theory behind microservices and the API Gateway pattern and were able to create a very simple setup demonstrating some of the key concepts.

Even though our implementation was very basic, what’s important is the possibilities of what we set up. We were able to continue serving some functionality of our app to our consumers, even though we were doing some upgrades to other functionality. This is often the case in microservices, where they may be different teams working on different functionality and microservices. With this approach, the team upgrading the functionality is responsible for the update, without extensive coordination across other teams.

The API Gateway provides a great “face” to our backend, where can easily control how our backend functionality is served to our consumers, without pushing those concerns downstream to each service. This means the actual services are much more agile and only need to be concerned with what they need to deliver to the API Gateway.

The next logical steps would be to build more microservices, enhance the API Gateway with more functionality such as logging, analytics, and resiliency, however, each of those points is essentially a new topic on its own, so let’s cash in our chips and applaud our efforts, leaving that for another day.