What Is a Priority Queue in C#?

Priority Queue is just a queue, with a twist. While the dequeuing order in a regular queue depends on the enqueuing precedence – First In First Out (FIFO), in a priority queue it depends on the priority of the element. In other words, the element that has the highest priority is dequeued first.

Let’s imagine a real-life situation. There are several patients in a hospital queue. Some of these patients are more critical to treat, for example, the elderly. We want to serve these patients before others, whenever they come in. That’s a scenario when priority queues are handy.

When we add an element, we also specify a priority to indicate how urgently we need to serve it. The element is compared to other elements in the queue and is positioned accordingly, and the element with the highest priority is served first: 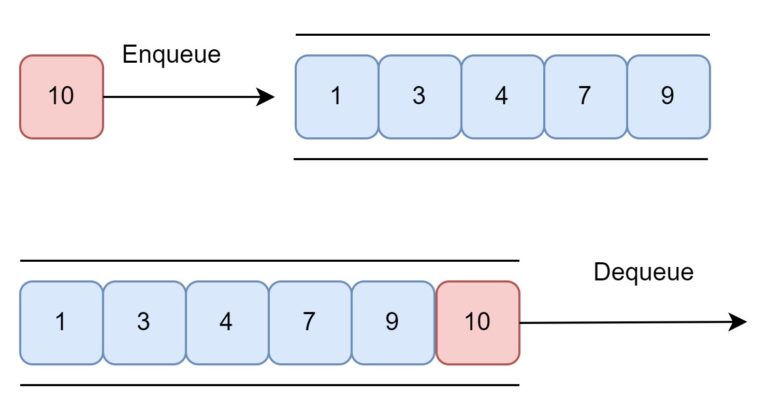 Let’s define our problem by creating the Patient class first:

Before we start our solution, let’s explain the underlying data structure used by PriorityQueue. It stores the elements in an array-backed min-heap, where the root node has the highest priority. The array heap has an initial capacity and when it gets full and we try to enqueue a new element, a new heap is created with a larger capacity. This is what we mean by the priority queue capacity. We will discuss how we can control the capacity in the next section.

Let’s start our solution by creating an instance of PriorityQueue. There is a number of constructors that we can use, let’s start with the parameterless one:

We create a priority queue with zero capacity and demonstrate this by calling the EnsureCapacity method. This method takes a number as a parameter and does two things. First, it checks if the queue has enough capacity to contain this number of elements, if not, it expands the capacity of the queue so that it does. Second, the method returns the final capacity. So we can always know the current capacity by calling EnsureCapacity and passing 0 as an argument.

Alternatively, we can specify an initial capacity when creating the priority queue:

We notice that the number of elements in the queue is 0, but there’s enough memory allocated for 5 elements. Initializing a capacity can reduce the number of unnecessary memory reallocations, which can be costly.

Finally, we can just pass our collection of patients and their priorities to the constructor:

We have mentioned that when we add a new element to a full priority queue, the back storage is expanded. So how much more memory is allocated? This is controlled by the growth factor. A growth factor is a number that we multiply by the current capacity to increase it. The growth factor in PriorityQueue is two, which means the capacity is doubled on each expansion. This number is a constant and cannot be changed.

Let’s enqueue an element to our current priority queue:

We can increase the capacity manually, by calling EnsureCapacity and passing the new number of elements we want to allocate memory for:

We now want to allocate memory for 42 patients, the current capacity is 20, so double that is 40. EnsureCapacity chooses the maximum of 40 and 42.

Now we have so much allocated memory, while only having 6 elements in the priority queue. We can release this unnecessary memory by calling TrimExcess method:

Apart from the capacity, we can use the Clear method to remove all the elements:

We notice that the capacity is still the same, this method only clears the priority queue, without any change to its capacity.

Now that we have covered all the creational aspects of our priority queue, let’s start utilizing it.

We know that when we enqueue an element in a priority queue we have to specify a priority value for it. In our example, we set the type of the priority type to int, so when we add an element we have to provide an integer that represents its priority. In the C# implementation, the lowest number has the highest priority (because it’s actually a min-heap, the root node is the minimum). Let’s use the Dequeue method to dequeue an element from our populated priority queue:

We can add new elements to the queue using Enqueue method:

We added a new patient, Roy, with the priority 1, which is currently the lowest priority value in our queue now. Although he is the last in, he is the first out.

Another useful method that we can use to enqueue and dequeue at the same time is EnqueueDequeue:

In fact, if the priorities are equal among two or more elements, there is no way we can tell which element will be processed first. Let’s create a new priority queue to demonstrate:

We gave all the elements the same priority, dequeued them, and wrote them to the console:

They are not dequeued in the same order they were enqueued. We conclude that, although being a queue, the priority queue has nothing to do with FIFO.

We create a class that implements IComparer. The Compare method compares two patients according to their ages. Remember that in our C# implementation, the less the priority value, the higher the priority. So the method returns:

Now, let’s provide our priority queue with an instance of this class:

We make a slight change to our list, it no longer contains priority numbers. We are using the patient object to calculate their priority. Then, we create a priority queue, passing an instance of HospitalQueueComparer. Finally, we populate our queue.

Let’s run the same tests to see if we get the same results:

We see that Elizabeth, the oldest, has the highest priority. Joe who’s fifty is next on the list. Great! Now we can guarantee that older patients get treated first.

When Is Priority Calculated?

Now, let’s check out the output and break it down:

The last two elements are both compared to Elizabeth, which is the oldest and remains the root element. That’s it, no more comparisons. So, the PriorityQueue instance makes just enough comparisons to specify the root element. It only knows which element to serve on the next Dequeue() call.

Let’s check out the output and break it down as well:

The first thing we notice is that before the first dequeue, all the child elements are compared to each other. We also notice that the comparison logic is similar to the first one, it only aims to find the next highest priority element. Here, it’s Joe. So, only now that PriorityQueue knows the next element it’s going to serve, it dequeues Elizabeth. If we continue, we see that the same pattern repeats.

This means that the elements are not stored in an ordered fashion, instead, the PriorityQueue only calculates the highest priority element on each enqueuing and dequeuing operation.

An instance of PriorityQueue is not thread-safe. Although we have a thread-safe implementation of the regular queue in C#: ConcurrentQueue, we still don’t have that for the priority queue. So, if we’re working in a multithreaded environment, we have to tackle race conditions ourselves when working with PriorityQueue.

In this article, we have learned how to create a priority queue in C#. We have discussed how we enqueue and dequeued elements, their processing order, and the underlying data structure. Also, we have implemented a custom priority queue with our customer sorting logic, through which we were able to understand the mechanism that the queue uses to achieve its functionality.