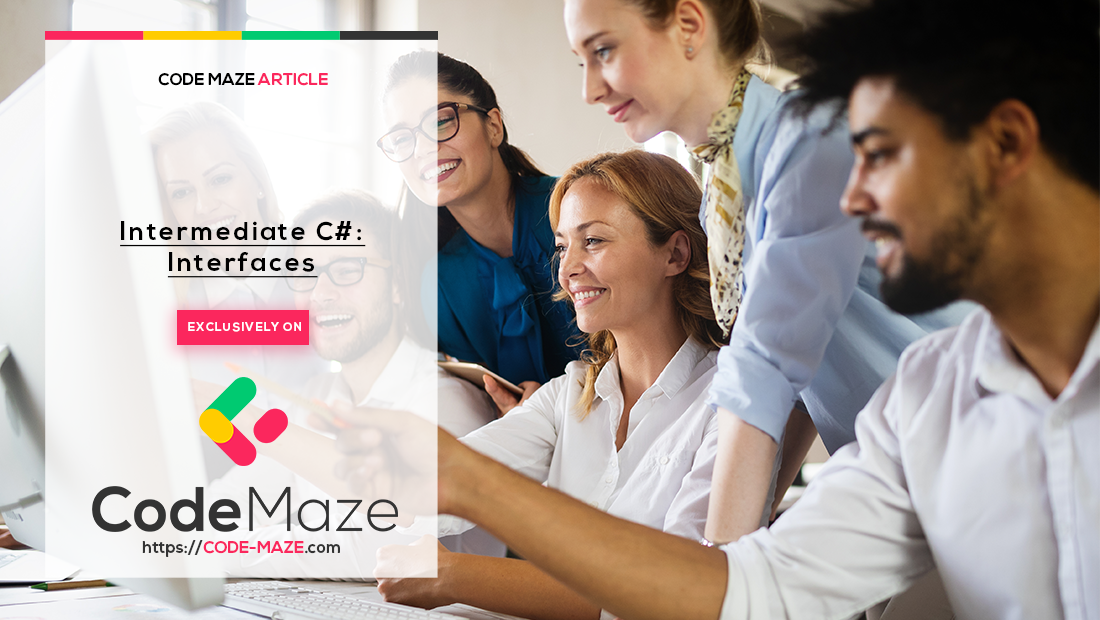 We can look at the interface as a contract which states that a class that implements an interface must implement all the members from it.

If you want to see complete navigation of this tutorial, you can do that here C# Intermediate Tutorial.

To download the source code, you can visit Interfaces in C# Source Code.

We are going to split this article into the following sections:

To implement an interface, we declare a class or structure that inherits from the interface and implements all the members from it:


Let’s see all of this through the example:

As we can see, after our classes inherit from an interface, they must implement the member WriteFile(). Otherwise, we would get a compiler error.

When we implement an interface, we must ensure to provide method implementation by following these rules:

A class can inherit from a class and implement an interface at the same time. But if this is a case, we must specify a base class first and then an interface comma separated:


As we can see, all the methods are available through the writer object. But let’s now use an interface object for referencing action:

If we use an interface to create an object, we can access only those members declared in that interface.

As we mentioned above, the interface provides a contract for the class that inherits from it. And this is a great advantage of using interfaces, we can always be sure when a class inherits from our interface it will implement all of its members.

But the interface implementation has even more advantages. One of them is object decoupling.

Using an Interface to Decouple Classes

When one class depends on another class those classes are coupled. This is something we want to avoid because if something changes in class A and Class B depends heavily on Class A, there is a great possibility that we would have to change a Class B as well. Or at least, we won’t be sure if Class B still works properly. Consequently, we want our classes to be loosely coupled or “decoupled”.

Let’s see what would happen if we create our classes as strongly coupled:


This XmlFileWriter is a class which has a purpose of writing to an xml file. Now we can instantiate our XmlWriter class, send the object through the XmlFileWriter constructor and call the Write method:

Ok, everything works great for now.

Another thing. We surely want to have the same behavior for our JsonWriter class. We can’t use this XmlFileWriter (because it accepts only the XmlWriter object), we must create another class and repeat all of our actions. This is pretty bad as well.

Finally, we can ask ourselves, if we really need two classes for the same job. Why can’t we use just one? Well, that’s where interfaces come in.


Excellent. This is so much better.

Now our class name tells us that this class doesn’t write only xml files. Furthermore, we are not restricting our constructor to accept just XmlWiter class, but all the classes that inherit from the IWriter interface. Our method WriteFile can’t be renamed now because of our interface IWritter, which states that all classes must implement a method with an identical name. We can see now that FileWriter class are decoupled from the XmlWriter or from the JsonWriter, and that we can send objects of both classes to the FileWriter class:

Isn’t this so much better?

Now we have one class that does its job for any class that inherits from the IWriter interface.

This feature is well known as a Dependency Injection.

A class can inherit just from one base class, but it can implement multiple interfaces. The class must implement all the methods defined in those interfaces:


As we can see, we are not using an access modifier in the method implementation.

In this article, we have learned:

In the next article, we are going to talk about Abstract Classes in C#.